Arguably the most popular comic strip in history, Peanuts became a cultural icon, published all over the world and leading to a thriving merchandising enterprise. Schultz’s characters were used to sell cars, snack foods, even life insurance, and merchandising items included everything from bed sheets to mugs, dolls, calendars, posters…you name it. In fact Bill Watterson, creator of my personal favorite Calvin and Hobbes, was at the other end of the spectrum, refusing to license his characters or let them be used for commercial purposes. In his mind, such usage cheapened the strip and robbed it of its impact, since there would be pressure to tone down controversial viewpoints, lest the sponsors get upset.

The characters were very different when Schultz began drawing them, with larger heads, giving them a more babyish look, and with different personalities than the ones we are familiar with now. Lucy was originally a zombie-eyed tot who was good at sports and taken care of by Charlie Brown, and Snoopy didn’t have any thoughts or the rich fantasy life he eventually discovered.

Kevin Wong of the video game blog Kotaku has a terriffic analysis of Peanuts and how Snoopy killed the strip, leading to its slow decline into irrelevance. This is as good a cultural history of Peanuts as any I’ve ever read.

Here’s a look at what the early Peanuts strip looked liked, from the 1950s: 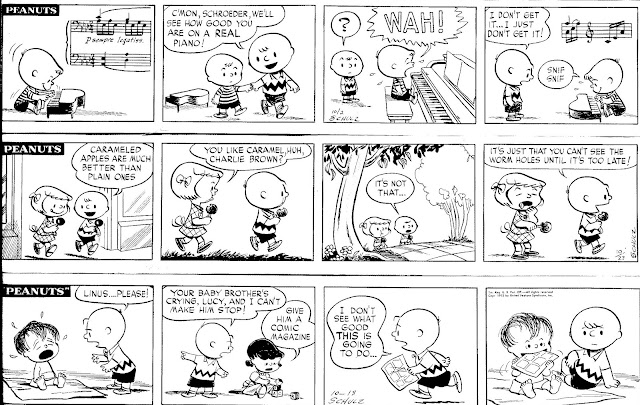 One hallmark of Peanuts was the lack of any adults in the strip. All the stories were told from the height of the characters, leaving the adults, even the teachers, unseen. Below is a very rare example of adults appearing in a Peanuts strip. Schultz discarded the idea of adults in the strip immediately.

Peanuts has never been a hilarious, knee-slapping kind of comic strip; the gags were always subtle and low key, and read today, they seem flat and devoid of the sharp humor that we are surrounded with today. The humor in the 50s was much less in-your-face than today’s humor (contrast Peanuts with Calvin and Hobbes). I’ve never laughed out loud when reading Peanuts. The strips were entertaining, but devoid of hilarity.

There is no denying the immense cultural impact of Peanuts, however; its characters have been used to shill everything from cars, to snack cakes, to cereal to life insurance, a practice that Schultz did not object to, seeing the strip as a way to sell more papers. The relentless use of Peanuts characters has indeed cheapened the strip, and sapped it of its creative impact, turning the characters into marketing tools. Besides marketing, there were Peanuts merchandise galore: toys, games, licensed comic books, school supplies, stuffed animals, appliances, calendars, greeting cards, housewares, clothing, even telephones and pencil sharpeners. If there was a way to profit from Peanuts, it has been done.

Below are some examples of  Peanuts advertising:

Peanuts remains a icon of a particular era, and reading Peanuts today is an act of nostalgia, a revisiting a genre of comics from an earlier, more innocent age. Perhaps that is what gives Peanuts its enduring charm.